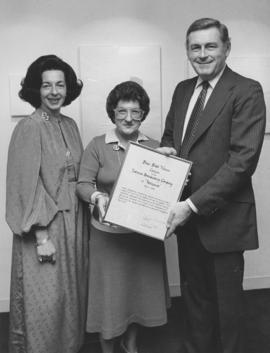 Photograph depicts two unidentified women and an unidientified man. The women in the centre is holding a framed document being presented from the B'nai B'rith Women to the National Broadcast Company for their documentary titled 'Holocaust'.

Interview with Claire Ann Kramer. Interviewed by Cindy Rozen. Ann talks about her family's history, the Apartheid, her childhood, and her career as an interpreter. She speaks in detail about her family's experience in Germany just before World War II, and the political state of South Africa which led to the decision to immigrate to Canada.

Oral history interview with Dan Sonnenschein on his mother Bronia Sonnenschein, who was born in Vienna in 1915. Dan talks about his mother’s experience during the war. She was smuggled into Poland after the annexation but ended up living most of the war in the Lodz Ghetto before being sent to camps in 1944. After the war she moved to Prague, where she worked for the Jewish Joint Distribution Committee. She got married in Prague and they moved first to Haifa Israel then Vancouver in 1950. Dan’s Father died in 1952. She got a job and raised her children as a single mother. After she retired, she volunteered with many organizations, including JCC and congress. She did a lot of work for holocaust education in BC by going on tours and giving talks to school groups and other organizations.

Oral history interview with David Rubin who was born in Transylvania, 1923. He was drafted into a working / bomb clearing battalion of the Hungarian Army in 1944. David chose to come to Canada in 1957 because he had heard it was the country of the future. The Canadian consulate chose Vancouver as his destination. Taught in Ottawa and was recommended to be the reader at Beth Israel Synagogue.

Oral history interview with Dr. Bluma Tischler, who was born 1924 in Baranowicz, Poland - now Baranavichy in Belarus. Bluma and her husband Issac attended medical school at the University of Odessa, than studied in Munich, Germany. Bulma and Issac wanted to emigrate to the United States but due to their quota's being full they decided to come to Canada.

Oral history interview with Dr. Peter Suedfeld. Peter Suedfeld was born in Hungary and emigrated to the United States in 1948. After three years of active duty in the US Army, he received his bachelor's degree from Queens College of the City University of New York in 1960 and his Ph.D. from Princeton University in 1963. He taught at the University of Illinois and at University College, Rutgers - The State University of New Jersey before moving to The University of British Columbia (UBC), where he was appointed Professor of Psychology in 1972. He served as Department Chairman at Rutgers from 1967-72, and at UBC as Head of the Department of Psychology from 1972-1984 and Dean of the Faculty of Graduate Studies from 1984-1990. In 2001, he was appointed Dean Emeritus of Graduate Studies and Professor Emeritus of Psychology. Suedfeld has held Canada Council and Killam Foundation Fellowships, and sabbatical or concurrent appointments as Visiting Professor at the University of New South Wales, Visiting Fellow at Yale University, Distinguished Visiting Scholar at the Ohio State University, and Distinguished Scholar in Residence at the Peter Wall Institute of Advanced Studies.

His research is generally concerned with how human beings adapt to and cope with novelty, challenge, stress, and danger. The research has three major aspects: laboratory and clinical studies on restricted environmental stimulation (for example, in flotation tanks); field research on psychological and psycho-physiological concomitants of working in extreme and unusual environments such as space and polar stations; and the archival and experimental study of information processing and decision making under uncertainty and stress. Archival and interview studies have concentrated on leaders at the national and international levels, but have also included combat officers, prisoners, and students. During the past ten years, he has been conducting an extensive series of studies of the long-term adaptation of survivors of the Nazi Holocaust. He is the author of more than 200 journal articles and book chapters. Among books that he has written, edited or co-edited are: Personality Theory and Information Processing, Attitude Change: The Competing Views, Restricted Environmental Stimulation: Research and Clinical Applications, Psychology and Torture, Restricted Environmental Stimulation: Theoretical and Empirical Developments in Flotation REST, Psychology and Social Policy, and most recently (2001), Light from the Ashes: Social Science Careers of Young Holocaust Survivors and Refugees. He has presented invited and keynote addresses at many institutions and conferences in North and South America, Europe, Australia, Asia, and New Zealand.

Suedfeld has served as Co-Editor of the Journal of Applied Social Psychology, and Book Review Editor of Political Psychology; he is currently Associate Editor of Environment and Behavior. He is also on the editorial boards of Political Psychology, the Journal of Environmental Psychology, and the Interamerican Journal of Psychology. He was the organizer and director of the Polar Psychology Project, a multi-national, transpolar project investigating human adaptation to high-latitude environments, as well as of the High Arctic Psychology Research Station near the magnetic North Pole. He has served as an expert witness in US and Canadian courts, and as a consultant to the Canadian Department of National Defence, NASA, the National Space Biomedical Research Institute, the Canadian Space Agency, and the US Peace Corps.

Suedfeld has been elected a Fellow of the Royal Society of Canada, the Canadian Psychological Association, the American Psychological Association (6 Divisions), the American Psychological Society, the Academy of Behavioral Medicine Research, the Society of Behavioral Medicine, and the New York Academy of Sciences. In 1994, he was awarded the U.S. National Science Foundation's Antarctica Service Medal; in 1996, the Donald O. Hebb Award of the Canadian Psychological Association for distinguished contributions to psychology as a science; in 2000, the Zachor Award of the Canadian government for contributions to Canadian society, and the Just Desserts Award of the UBC Alma Mater Society for service to students; and in 2001, the Harold D. Lasswell Award for distinguished scientific contributions to political psychology. In 2002, he was named as the Monna and Otto Weinmann Memorial Lecturer by the US Holocaust Memorial Museum.