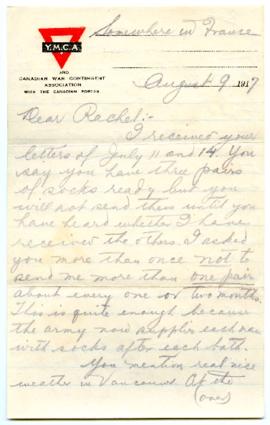 Letter from Private Edward Joseph Seidelman, dated August 9, 1917. Sent from "Somewhere in France" to Rachel Seidelman of Vancouver. Private Seidelman's letter briefly mentions his sister, Rachel, meeting a Mrs. Odlum, whose husband was the Brigadier-General during the war and his name is assumed to be Victor Odlum.