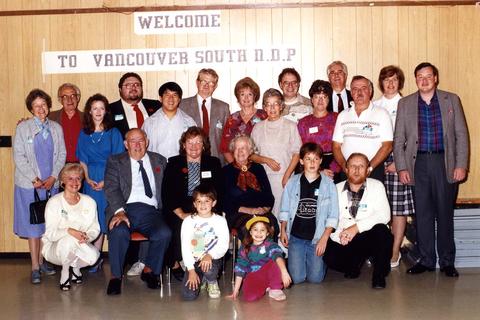 Photograph depicts a group of people posing in front of a wooden wall. On the wall is a banner, which reads: "Welcome - To Vancouver South NDP". Bernie Simpson is in the back row, third from the right. To the left of Bernie is Sylvia Russell. Second from the left, seated in a chair in the second row is Helene Minishka. The young girl in pink pants kneeling at the front of the group is likely Bernie's daughter, Samantha Simpson. Written on verso: "A12" and "Robert Edel".