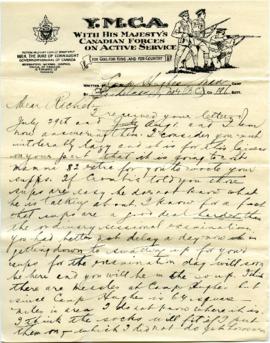 Undated letter from 1916 from Private Edward Joseph Seidelman. Sent from Camp Hughes, Manitoba to Rachel Seidelman of Vancouver. In the letter, Private Seidelman writes that he thinks there are measles in the camp. He also mentions, from reading in a Vancouver newspaper, the son of someone he knows in Vancouver was honoured by Sir Douglas Haig, the British Commander-in-Chief.