An Interview with Edith (nee Lohn) Thompson who was born in British Columbia. She enlisted in the RCAF Women’s Division in 1942 in secretarial positions and postwar than worked for senior medical health officer. Her brother Earl served overseas in Italy throughout the war. Edith and her husband George moved to California in 1963 but moved back to Vancouver in 1983 following the death of their youngest son; safety and the lack of violence prompted move. Ran 'Vancouver Antique Centre' on Richard and Harris and was quite successful. Involved in Hadassah, the Vancouver Art Gallery and is a member of Richmond Country Club.

Oral history interview with Irving Max Nitkin who was born in Montreal in 1937. His father came to Canada in 1909 and his mother came in 1922 and they met in Montreal. He studied and has a degree in engineering. Irving joined Beth Israel's Men's Club after moving to Vancouver and served on every board and committee position except Treasurer. Now they are part of Har El, a much smaller and younger congregation. "Mr. Nitkin view on density is that he is all for it but his problem is with the fact that Vancouver is being superimposed onto a grid that was never laid out with density in mind. Irving states that the roads are too narrow, creating 'narrow canyons' between the buildings."

Oral history interview with Jacob Butt, who was born in New Denver, BC in 1981. 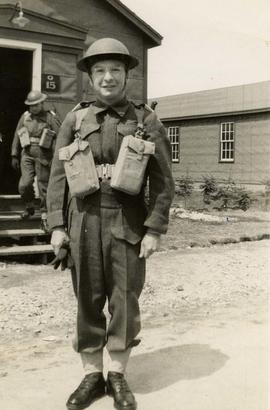 B&W print depicts Dr. Irving Snider posing for the camera in his army uniform including a pack on his back. On the back of the image is written: "Just before we left on the Victory Loan Parade in 3 Rivers, marched like this for 3 1/2 hours but I didn't mind it although I was tired and hot. I should have turned around so you could see the packs on the shoulder."