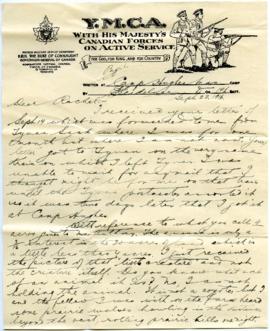 Letter from Private Edward Joseph Seidelman, dated September 23, 1916. Sent from Camp Hughes, Manitoba to Rachel Seidelman of Vancouver. In the letter, Private Seidelman mentions that Mr. M.A. Macdonald was appointed Attorney-General of British Columbia. He also mentions that he will be leaving for England around October 6, to train there. In addition, Private Seidelman says a Manitoba officer of his battalion, Lieutenant Tobias, who is also Jewish, is inviting him to come along on September 27 to spend the Jewish New Year at Lieutenant Tobias' residence in Winnipeg.