Oral history interview with Reita Goldberg & her father Abe Gurevitch. Abe was a part of the Golden Age Club and was involved for fifty years in Chevra Kadisha.

Oral history interview with Reva Checov who was born in a small village in Russia in 1897. Later in life when she emigrated to Canada she went to McGill University and the University of British Columbia. Reva was involved in the Pioneer Women, National Council of Jewish Women, B'nai B'rith; Red Cross, Heart Foundation, Cancer Society ; Israeli Affairs and the Jewish National Fund among an assortment of other roles.

Oral history interview with Rose Cohn. Interview has summary but no transcript. Digitized in November, 2011. Rose was born in 1904 in San Francisco, belong to the Council of Jewish Women and the Hadassah. 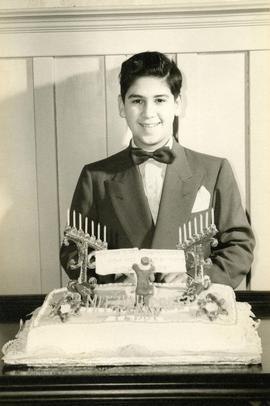 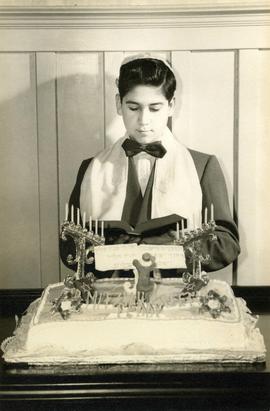 Photograph depicts a portrait of Teddy Fromson at his Bar Mitzvah. 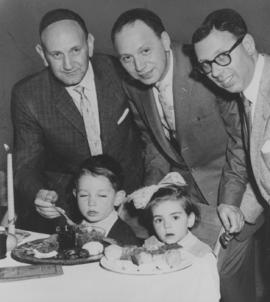 Photograph depicts three men with two children in front of a table with two plates of food and a candle. Shabbat

Walter was born in Muenster Germany in 1933, shortly after Hitler came to power. He immigrated to Scotland with his family when he was six and a half, just two weeks before the outbreak of the second world war. As an adult, he moved to Saskatoon, Sask., where he lived with his life Lois and raised four children. He spent is career in the agricultural feed business and was involved in volunteer work with the Chevra Kadisha in Saskatoon. 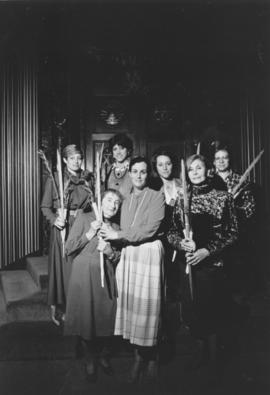 Photograph depicts a group of unidentified women at a Bat Mitzvah.