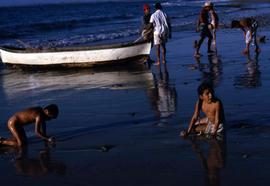 Colour Kodachrome 35mm slide depicts two children playing on a beach with people and a boat in the background.

The collection consists of sound recordings of Jewish pioneer and community figures relating to travel to and life in British Columbia and the Yukon from the Gold Rush era to the present. The memories chronicle Jewish life, community and organization development, and the transition from Jewish old world existence to that of the new world . Judaism and cultural elements, rural and urban life are explored in the interviews.

Interview with Yosef Wosk, interviewed by Carol Herbert. Yosef speaks about his family’s history in Ukraine and Russia and how pogroms and anti-Semitism led to their immigration to Vancouver, Canada. Yosef discusses his father’s beginnings in Vancouver and the growth of the Wosk business as peddlers in the furniture business, primarily in South Granville. He talks about his upbringing and relationship to his family and their immense presence in both the Jewish and business community. He speaks about his lengthy education at numerous secular institutions and rabbinic schooling at two Yeshivas and with scholars in North America and Israel. Yosef discusses his career as a rabbi in North America and his directing of interdisciplinary programs at Simon Fraser University.

.Interview with Renee Kursan. Interviewed by Sara Bernstein. Renee talks about her family's history, her education, and her childhood growing up in Cape Town and Mossel Bay, South Africa. She discusses her career as a nurse and life raising her young children outside of Queenstown and in Cape Town. Renee speaks about her and her family’s immigration to Vancouver, Canada. She compares Jewish life in South Africa to Canada and the countries’ culture, race and the Apartheid in South Africa.

Oral history interview with Alan Tapper, interviewed by Matthew Graves and assisted by Alan’s wife, Daphne. Alan speaks on his family’s history as well as adolescence in the Jewish community of East London, England, including the artistic and political environment. Alan talks about his family’s experience during the Second World War in London where his neighborhood was heavily bombed and impoverished by rationing, leading to his family’s evacuation to Devon and Newcastle. Alan discusses his involvement in various youth groups and theatre during the war, such as the Brady’s Boy Club. He talks about his military training at Padgate and subsequent conscription into the Royal Air Force intelligence unit where he was stationed in Egypt to monitor conflict over the Suez Canal. Alan speaks about how his military experience impacted his life and also the anti-Semitism he observed. He discusses his immigration to Vancouver, Canada and his role in numerous Jewish and Zionist organizations and boards, including B’nai Brith and the Canadian Jewish Congress. He talks about his job in fundraising, teaching public speaking, and radio program hosting, as well as his children and marriage.

Oral history interview with Irma Schneider, interviewed by Cindy Rozen. Irma speaks on her family’s history as well as her early life and adolescence in East London, South Africa. Irma also discusses her childhood education in a Catholic convent and her experience with camp and Habonim. When she was married, she lived in Cape Town, where her children were also born, and in 1980, she immigrated to Vancouver, Canada. She details her family’s and her own experience with immigrating to Canada and speaks about her marriage and her children’s families.

Oral history interview with David Skulski, interviewed by Alysa Routtenberg. David, born in Moose Jaw, Saskatchewan, speaks about his family’s history in Ukraine [Beresteczko] and Russia and immigration to Canada. David discusses his early life and adolescence in Moose Jaw and North Battleford and relocation to New Westminster, British Columbia. David talks about both his secular and religious education and relationship to the Peretz Centre for Secular Jewish Culture, both in his youth and later in his leadership. David also speaks of his experience as a professional oboist, which influenced his founding and direction of Early Music Vancouver, residency at SFU, and role in Vancouver’s symphony.

Interview with Shira Blustein about her relationship with food and the food industry. Shira discusses her experiences running vegetarian restaurants, The Acorn and The Arbor, in Vancouver. She talks about the role of food in her family. Shira also discusses her participation in the punk rock music scene in Calgary and her involvement in an alternative country band, Blood Meridian. There is also conversation about raising children in a multi-faith household and Birthright.