Three adults and two children gathered around large arch structure made of logs; Burrard Inlet and North Shore in background. 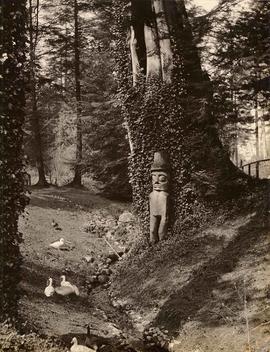 Open air observation car in bottom right corner of image, with train snaking into centre of image; bush and forested area in left of image with craggy mountain peaks in background.

Open air observation car in bottom left corner of image, with train snaking into centre of image; bush and forested area in right of image with craggy mountain peaks in background.

The C.P.R. Station, Golden, BC

Rail tracks, foot bridge and river in foreground of image; small out building in left centre with larger building across river; mountains in background.

Photograph depicts a group on horseback, next to a tipi.

Six people on horseback next to light coloured tipi in right of image; lake with forested shoreline in middle of image with rocky mountains culminating in snow-capped, ridged peak in background.

Photograph depicts people gathered on lawn in front of a group of cabins at Yoho National Park.

Group of people with cameras on tripods and a car gathered on lawn in front of a bungalow; smaller cabins in background with trees and mountain face behind.