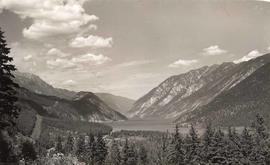 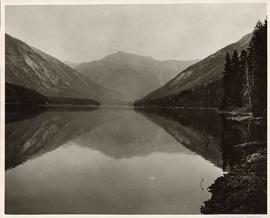 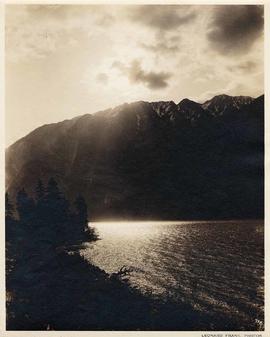 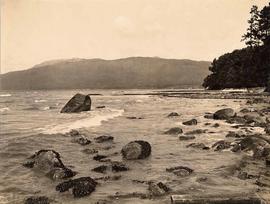 Photograph depicts the shoreline and surf at Stanley Park.

Jagged shaped mountain with extensive shale deposits at bottom; partially white faced on left side of mountain (image is extremely high contrast, making it difficult to distinguish whether white is snow or merely lighter patch of dirt and rock).

Photograph depicts a mountain and glacier.

Two men standing outside of row of tipis on flat, grassy area; hill with glacial deposits and mountains in background.

Photograph depicts Lake Agnes and Mirror Lake, from the heart of the Rockies.

Photograph depicts Abbot Pass. Abbot Pass is a col in the Continental Divide between Banff and Yoho National Parks. It is located at an altitude of 2,925 metres (9,598 feet) and about 1,372 metres (4,500 feet) above Lake Louise. Abbot Pass was named in honour of Philip Stanley Abbot, who became the first mountaineering fatality in the Canadian Rockies when he fell to his death in 1896 while attempting to climb Mount Lefroy.

Photograph depicts Field, B.C. with Mt. Stephen in the background.

Small grouping of bungalows among birch trees in foreground of image with snow ridged, rocky peak in background. 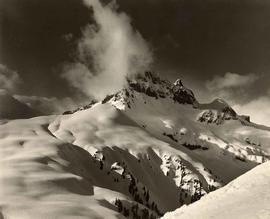