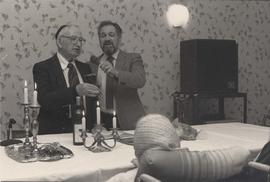 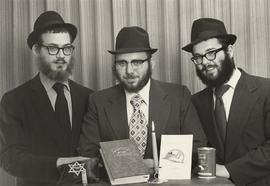 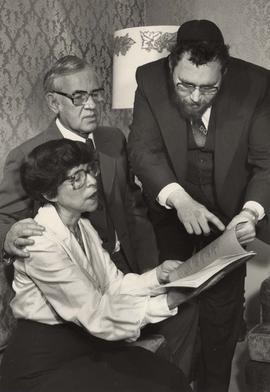 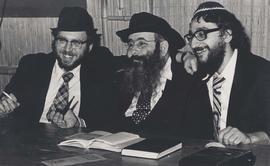 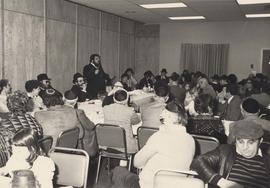 An interview with Sonia Rose, who was born in England and arrived in Victoria in 1918. She describes her involvement in Jewish community life in Victoria. Sonia was active in Eastern Star and B'nai B'rith, a charter member of Hadassah, member of Red Cross, Canadian Club, Musical Arts Society, Hospital Auxiliary, and Council of Canadian Citizenship. She also wrote a Victoria column for the Jewish Western Bulletin. Sonia begins the interview discussing her family hosting Rabbi J.H. Hertz, Chief Rabbi of the British Empire, during his visit to Victoria in 1921. 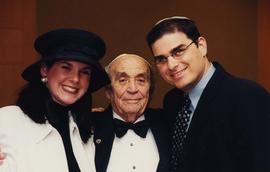 Interview with Yosef Wosk, interviewed by Carol Herbert. Yosef speaks about his family’s history in Ukraine and Russia and how pogroms and anti-Semitism led to their immigration to Vancouver, Canada. Yosef discusses his father’s beginnings in Vancouver and the growth of the Wosk business as peddlers in the furniture business, primarily in South Granville. He talks about his upbringing and relationship to his family and their immense presence in both the Jewish and business community. He speaks about his lengthy education at numerous secular institutions and rabbinic schooling at two Yeshivas and with scholars in North America and Israel. Yosef discusses his career as a rabbi in North America and his directing of interdisciplinary programs at Simon Fraser University.

Oral history interview with Rabbi Victor Reinstein who discusses rabbinical studies and the importance of adjusting to contemporary shifts in attitudes, views and societal understanding. Rabbi Reinstein is supportive of and has tried a number of times to increase interfaith connections, not just at the public level, but administrative or religious officials.

Interview with Stan Shear. Interviewed by Michelle Mina. Stan talks about his family's history and Jewish heritage, and compares life in Canada to South Africa. Now a retired electrical engineer, Stan frequently contributes to the Vancouver Jewish community through his music.