Oral history interview with Bill Gruenthal who was born in 1935 in Netanya, Palestine. His father's side is from Silesia, Germany and his mother's side comes from Lower Saxony and Aachen. In 1945-46, life became too hazardous, so they decided to get out of Israel. Friends suggested either British Columbia or New Zealand, John contacted both governments; B.C. responded first, that decided him to come to BC. Bill applied for various jobs after finishing a typing course, was declined by Imperial Bank of Commerce because he was Jewish, applied and was hired as junior clerk with an insurance company. He has been in insurance since Jan. 1953. Met his wife, Noemi, at a young adult group that met every Sunday night at the JCC. Talks about “Vancouver Diaspora” and the Vancouver Jewish Community. Bill has been a part of the Jewish National Fund and worked for the Vancouver Board of Trade

Oral history interview with Ruth (nee Baruch) Phillips was born in Poland in 1927. The family left Poland in the 1930's due to pogroms and growing antisemitism. Ruth's father moved the family to Vancouver in 1934 to become the principal at Talmud Torah. Ruth’s Husband, Maran Peter Phillips, ran a fish packer for Queen Charlotte Fish. 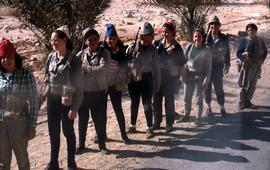 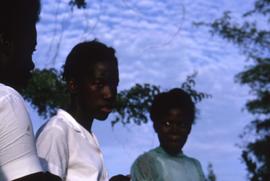 Colour Kodachrome 35mm slide depicts three unknown children with trees and a blue sky with clouds behind them. One of the women is wearing a blue dress. 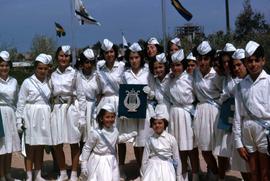 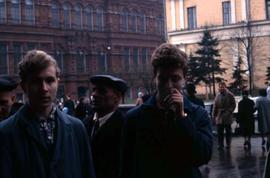 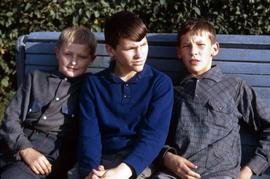 Three boys sitting on a bench

Note for slide reads: "I gave these boys gum and ball point pens and they pinned 5 buttons on my coat lapel." 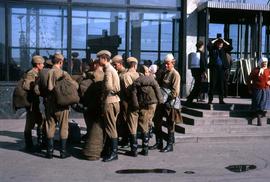 Soldiers in front of the Trans-Siberian train station

Colour Kodachrome 35mm slide depicts a group of young men in military uniforms in front of the Trans-Siberian train station in Irkutsk.

Note for slide reads: "We then asked to be taken to Trans-Siberian Station. The word 'Irkutsk' is on top of Station." A train had just arrived and these people were waiting for transportation. As was this group of young Russian soldiers." 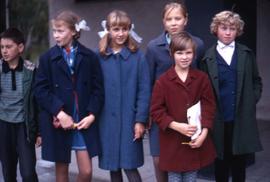 Note for this slide reads: "Teenagers." 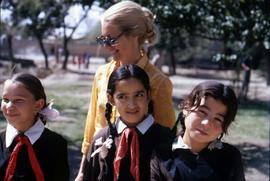 Lady from Toronto with three teenagers

Note for this slide reads: "Lady from Toronto with three teenagers."