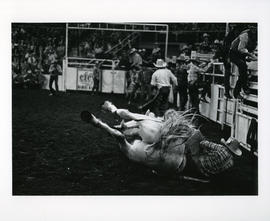 [Cowboy and Horse Falling Over]

Photograph depicts a man riding a horse; both the man and the horse are lying sideways on the ground. The man's leg is trapped under the horse. Rodeo participants watch in the background. 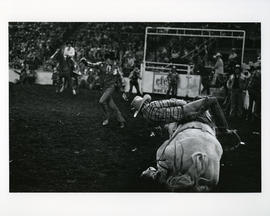 [Cowboy Falling Off a Horse]

Photograph depicts a man falling sideways off a horse on the ground; rodeo participants stand nearby watching and a large audience looks on. 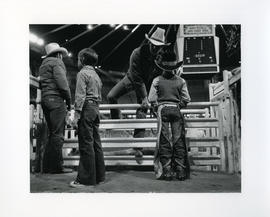 Photograph depicts two young children standing next to the rodeo arena; two men stand nearby, one approaching the children by climbing over a fence. The title suggests Kelly Crouch and their father are in the photograph. 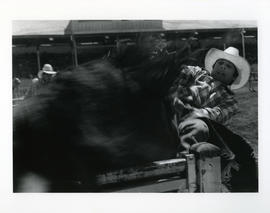 [Cowboy Falling off a Horse]

Photograph depicts a man falling sideways off of a horse in the rodeo arena.

[Two Cowboys Next to Pens]

Photograph depicts two men next to a large pen full of cattle; one is standing and smiling, while the other is sitting. Bags and saddles lie in the forefront. 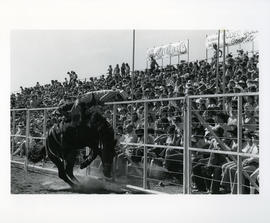 [Man Thrown Over a Fence]

Photograph depicts a man flying off of a bucking horse over a fence; a large audience looks on.