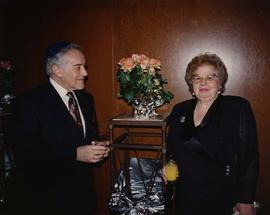 Photograph depicts Marvin and Rita Weintraub. Rita is looking at the camera while Marvin is looking in the direction of the woman. This image was taken at the 60th anniversary event. They are both holding drinking glasses. There is a table between them with flowers on it.

Oral history interview with Charlotte Piek who was born in Munich. She moved to the United States in 1939 with her husband. Mrs. Piek talks the intermingling of the Jewish communities in Munich while she was growing up and living in Germany pre-WW2. She was very active with B'nai B'rith and talks about her work with them.

Oral History of Anne Goldbloom. Her father was from Poland, and her mother was from Russia, they meet in Liverpool. Her uncle, Jack Stark, was the first family member to come to Canada. He originally settled in Winnipeg but moved to Vancouver before Anne's family immigrated. Her father followed her uncle to Canada and they opened a store together. At 16 Anne got a job as a stenographer, a skill that she used working as Secretary for many Jewish community organizations. During WW2 she was in charge of the knitting group that was making items to send to the overseas soldiers. Most of the interview is about her work with the National Council of Jewish Women and their Baby Clinic. She talks a lot about the Jewish community that she grew up in Vancouver.

Oral History interview with Sonia Sara Bellas, who immigrated to Canada in November, 1925, from a small town near Kiev, in Russia. Her family, unable to move to the United States, settled in Winnipeg. The purpose of immigration was to live closer to family that had settled in Philadelphia. Sonia attended school until grade 11, after which she went on to work in laundry and dry cleaning. She met her husband in 1940, and they were married on December 26, 1942, at his parents' home in Vancouver. They had several children together. Whilst living in Vancouver, Sonia worked in clothing retail. After her retirement, she spent much of her time with her husband and children and fondly remembers entertaining guests at her home. At the time of the interview, she enjoys attending services with her family for high holidays, having lunch with her children and grandchildren weekly, and was a member of Seniors Club. Her son is also present at the interview and offers additional insight to his mother's life as well as his experience growing up with his mother and father.

Oral history interview with George Weinstein. . George was born in Romania in 1925 and moved to Vancouver as a small child. He talks about his family and his mother’s involvement with the Vancouver Jewish Community. In 1944, he left high school and joined the Canadian Navy. After the war he went to work for his uncle in the scrap metal business driving a truck. He met his life Mildred at a Jewish Youth Group and they had 3 sons together. He talks about his parents coming to Vancouver in 1900 and his mother’s Journey in 1928. He talks about growing up in Vancouver.

Oral history interview with Dan Sonnenschein on his mother Bronia Sonnenschein, who was born in Vienna in 1915. Dan talks about his mother’s experience during the war. She was smuggled into Poland after the annexation but ended up living most of the war in the Lodz Ghetto before being sent to camps in 1944. After the war she moved to Prague, where she worked for the Jewish Joint Distribution Committee. She got married in Prague and they moved first to Haifa Israel then Vancouver in 1950. Dan’s Father died in 1952. She got a job and raised her children as a single mother. After she retired, she volunteered with many organizations, including JCC and congress. She did a lot of work for holocaust education in BC by going on tours and giving talks to school groups and other organizations.

An interview with Ada Silverton - born 1895 - and Eli Barish. Ada Grew up on a settlement colony farm in Wapella. She lived on the farm until she was married. She talks about going to school, getting medical care, the animals, and the community on the farm. Eli talks about his grandparents farm.

Oral interview with Alex Kliner. Interviewed by Peter Doolan for SLAIS Oral History class. Kliner was born in Philadelphia in 1930. His parents were from Rusia and he talks about his parent’s life and growing up in Philadelphia. At 20 he was drafted to fight in the Korean War. He came back and studied acting at Hedgerow. After he graduated, he went to New York to work on Broadway. Morris Schwartz told him not to go into Yiddish Theatre because it was dying. He talks about McCarthyism and the blacklist in Hollywood and on Broadway. A friend convinced him to move to Hollywood. Here he went to Los Angeles Community College and UCLA and got a master’s degree. His teachers told him not to get his PhD and got into teaching instead. He moved to Vancouver to work at the Peretz School. He then became the program director at JCC. With Tova Sneider he started the Jewish Heritage Theatre Company. Later he became the Executive Director of State of Israel Bond. He also worked with Chelm Cultural Club