Oral history interview with Hilda Everall who was born in Germany in 1923. Her interview discusses her experiences growing up in Germany, the rise of Nazism, wartime in England and her time in Vancouver where she engaged with the Jewish community ... 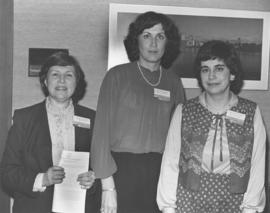 Oral history interview with Reva Checov who was born in a small village in Russia in 1897. Later in life when she emigrated to Canada she went to McGill University and the University of British Columbia. Reva was involved in the Pioneer Women, Nat...