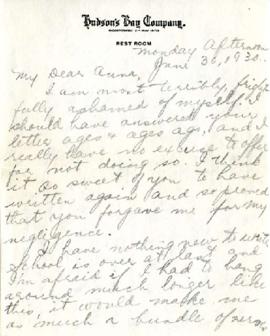 Handwritten letter from Dina to Ann on June 30, 1930. Dina talks to Ann about her involvement with Morris.

Oral History interview with Elaine Charkow. Elaine was born in Russia, the family emigrated when she was 8. They first stopped in Winnipeg. Father worked in the grain business. Moved to Vancouver in 1926. Her mother took in 2 refugees from China in the 30’s. Father was one of the founders of the Vancouver Free Loan Association. Talks about the Jewish Community Center on 11th and Oak. Elaine instrumental in finding housing for Polish immigrants. Worked with B’nai B’rith Girls, United Jewish Appeal, and Hadassah.

Oral history interview with Goldie Angel who was born in Poland and arrived in Winnipeg in 1909. She belonged to B'nai B'rith in Vancouver.

Oral history interview with Sam Barrett who was born in Winnipeg in 1897, fought during the First World War where he sustained a life-long eye injury.

Oral history interview with Dr. Isaac Stoffman who was born in Winnipeg, 1916. He graduated from the University of Manitoba, began his Doctor's practice in Yellow Grass, Saskatchewan. He than enlisted in the Canadian army in 1943 as a medical officer, stationed in Regina Military Hospital and Dundern military training camp than as a psychiatrist in London Ontario.

Oral history interview with Dorothy Pelzman who was born in Vancouver, 1927.