Oral history interview with Zora ("Zoe") Gropper, who was a part of the National Council of Jewish Women in Saskatoon and discusses the political climate of the twenty-first century.

Oral history interview with Zoltan Fleischer in preparation for the 2014 Scribe with a focus on Jewish scrap metal dealers. He was born in Hungary in 1927. His father was drafted by the army in 1938, the army took their horses as well. Hungary was liberated by the Russian Army. He stayed in Hungary until 1956, when he came to Canada. He choose Canada because he had never heard anything bad about it. When he arrived here, he only spoke Hungarian and only had $5.00. His sister, brother-in-law, and him traveled by train across Canada to Victoria. He got a job in a scrap yard saved his money and bought land in Surrey. He opened a furniture business but sold it when the SkyTrain was being built. He then bought Scott Road Trading and Auto Wrecking. 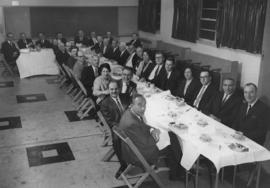 Photograph depicts a group of people at a table. 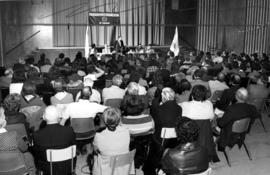 Photograph depicts the audience at the Zionist Forum, with G. Strasman speaking. 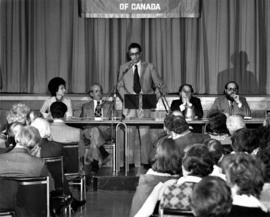 Photograph depicts an audience in front of a head table. At the head table is (l-r) Mrs. B. Freedman, H. Orloff, A. Shapira, G. Strasman, and H. Shaked. 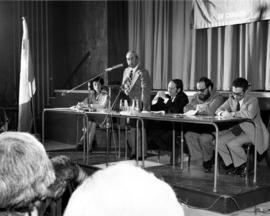 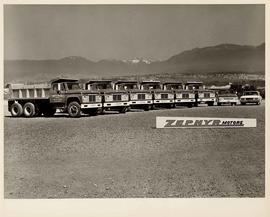 Six "MERCURY" dump trucks; "UNITED CARTAGE Company", "TR 6-2255", "G.V.W. 42000 LBS" printed on side of trucks; two cars parked beside dump trucks, one dark, the other white; sign in front of vehicles reads "ZEPHYR MOTORS"; Lions (the mountains) in the background.

Photograph was associated with the terms "Transco. Ltd." and "White and Taylor Ltd.". 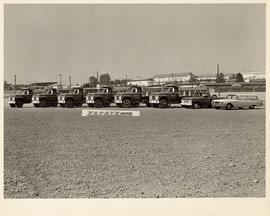 Photograph was associated with the terms "Transco. Ltd." and "White and Taylor Ltd.".