Interview with Ilana Strummer. Interviewed by Bill Gruenthal. Ilana discusses kibbutzim in Israel and her family's history. She talks about her physiotherapy work in the Israeli army before immigrating to Canada, and her subsequent involvement in the Vancouver Jewish community.

Oral history interview with Allan Nortman in preparation for the 2014 Scribe with a focus on Jewish scrap metal dealers. 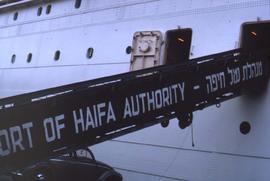 Colour Kodachrome 35mm slide depicts a gangway with the words "Port of Haifa Authority" on the side.

Follow-up interview with Sheila Romalis. Interviewed by Debby Freiman. Sheila talks about growing up in Vancouver during the Cold War, her education, and her involvement in the community. Her husband, Garson "Gary" Romalis, was a gynecologist who specialized in abortions. She talks about their shared beliefs on women's rights, and the attempts made on his life by by antiabortionists.

Oral history interview with David Rubin who was born in Transylvania, 1923. He was drafted into a working / bomb clearing battalion of the Hungarian Army in 1944. David chose to come to Canada in 1957 because he had heard it was the country of the future. The Canadian consulate chose Vancouver as his destination. Taught in Ottawa and was recommended to be the reader at Beth Israel Synagogue.

Oral interview with Rotem Tal and Itamar Shani. Interviewed by April Thompson for the Feeding Community podcast. Having both immigrated from Israel, Rotem and Itamar together own Chickpea, a Mediterranean food truck and restaurant in Vancouver, BC.