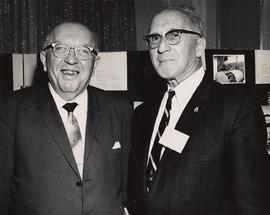 Oral history interview with Bertha Hornstein who was born in Montreal and moved to Vancouver in 1926. Well involved in the Jewish community such as B'nai Brith, Hadassah and the Federated Jewish Women of Vancouver. During the Second World War Bertha worked with the Red Cross as financial secretary.

Oral history interview with Betty Nitkin, who was born in Montreal, 1941. He parents studied and met at the University of Lwow. Working in between Montreal and England during the 1960's but due to a combination of Montreal's winters and the political situation in Quebec convinced the family to move to Vancouver in 1968. Mrs. Nitkin was involved in the National Council of Jewish Woman for many years chairing the Committee for Soviet Jewry during the 1970's. Mrs. Nitkin volunteered the Vancouver Jewish Centre helping settle Bosnian refugee families during the 1990's. 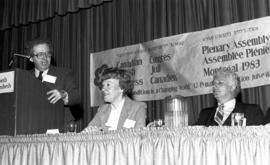 Photograph depicts two men and a woman at a panel at a Plenary Assembly on the Holocaust. 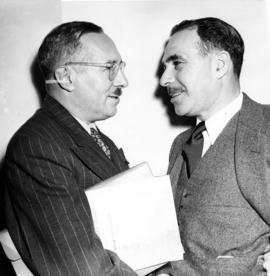 Photograph depicts two unidentified men shaking hands. Under the arm of one of the men is a file folder and a paper from a meeting held in the Mount Royal Hotel.

Oral history interview with Dorothy Grossman who was born 1893 in Montreal. She was involved with the Red Cross during the Second World War.

Oral history interview with Ernest ("Smoky") Smith who was born in British Columbia in 1914. Ernest fought in Italy during the Second World War under the Seaforth Highlanders of Canada, earning a Victoria Cross for his actions on the Po river. Noteworthy for how he received his cross.