Photograph depicts the Banff Springs Hotel in Fairmont, Alberta, showing a summer view of the hotel and surrounding Rocky Mountains.

The hotel was commissioned by Cornelius Van Horne, the general manager of the Canadian Pacific Railway. Designed in the Late Victorian chateau style by New York architect Bruce Price, the hotel opened on June 1, 1988 and was rebuilt in 1928 after a fire destroyed much of the original structure.

Photograph depicts the Banff Spring Hotel golf course at the No. 1 green.

Four men on golf green, one holding green flag, one putting, the others watching; sand trap in foreground; mountains in background.

Photograph depicts the Glacier of the Angel at Mt. Edith Cavell in Jasper National Park.

Trees silhouetted against area littered with glacial deposits in middle of image; glacier extending off of mountain face in background. 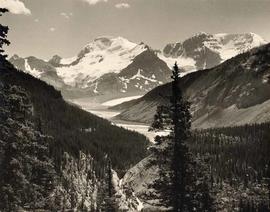 In the Canadian Rocky Mountains

Photograph depicts Lake Agnes and Mirror Lake, from the heart of the Rockies.

Small trees and canoe labeled "JASPER LODGE 6" in foreground of image with placid lake surface behind; row of cabins on lake-shore with obscured mountains in background.

Trees silhouetted against lake with treed shoreline in foreground of image; ridged, snowy peak in background.