In the interview, Brigitte describes her memories of the desecration; her thoughts about the vigil and the community response; her personal valuation of the Emanu-El cemetery as a neighbor who appreciates the cemetery’s beautiful appearance as well as its sacred and historical resonance; her opinion on what historians can do in the wake of such an event; and her own experiences with the sacredness of cemeteries.

Follow-up oral interview with Leah Levitt. Interviewed by Debby Freiman. Leah talks about her extended family, education, and her involvement with B'nai Brith Girls and the National Council of Jewish Women. 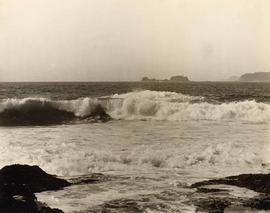 Low lying rocks in low tide in foreground of image; white-capped waves crashing against rocks and sandy shore in foreground; ocean, islands, and horizon in background.