Oral history interview with Louis Zimmerman who was born in Toronto in 1911. He was stationed overseas in England and Scotland, operating England's coastal radar chain between 1941 - 1945. He discusses Vancouver's Jewish Community Centre and the start of his career in Vancouver in 1948. Was recognized as a "servant and master" of the Jewish community in Vancouver for his outstanding record of service.

Oral history interview with Harold Lenett who was born in Regina, 1928.

Oral history interview with Jack Austin who was born in Calgary in 1932 and worked with the BC Liberal party with Arthur Liang on campaigns and on trade negotiations between Canada and US related to water. In Ottawa he worked with Paul Martin and Arthur Liang as well as Prime Ministers Pierre Elliot Trudeau and Jean Chretien in the energy and natural resources sector. He was awarded Mexico's Order of the Aztec Eagle for his services.

Oral history interview with Mitchell Snider who was born in 1918. He was a radar technician for the Canadian Air Force during the Second World World. 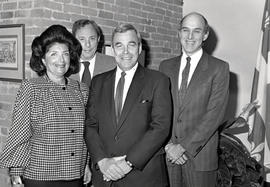 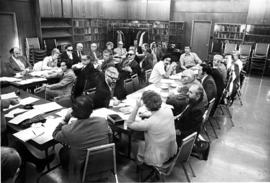 Photograph depicts a group of people at tables with documents. 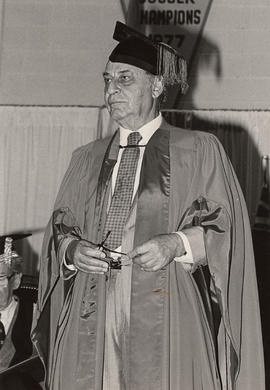 Nathan A. Taylor receives his Doctor of Laws Degree at York University