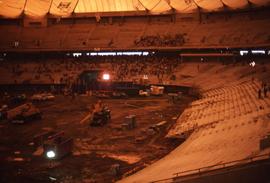 Colour Kodachrome 35mm slide depicts the interior of BC Place with the bleachers and a portion of the roof is seen.There are trucks in the centre on a soil floor. 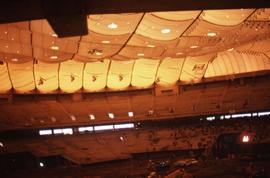 Interior of BC Place under construction

Colour Kodachrome 35mm slide depicts the interior of BC Place with people sitting in the bleachers on the right of the image and the roof can be seen as well as trucks in the centre on a soil floor. 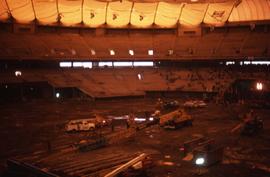 Colour Kodachrome 35mm slide depicts the interior of BC Place with trucks and vans on the soil floor and on the right of the image there are people sitting in the bleachers. A portion of the roof can also be seen. 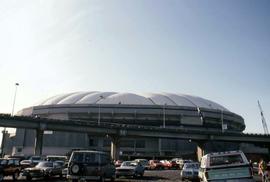 Colour Kodachrome 35mm slide depicts the exterior of BC Place with the Georgia Viaduct and cars in the foreground. 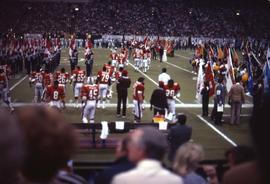 Colour Kodachrome 35mm slide depicts football players on a football field with people lined up holding flags on the right and left of the image. There is a crowd in the foreground.