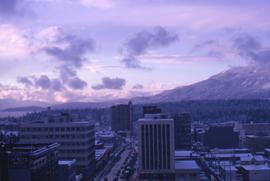 Colour Kodachrome 35mm slide depicts a sunrise over a cityscape with a mountain and trees in the background. This image is likely of Vancouver. 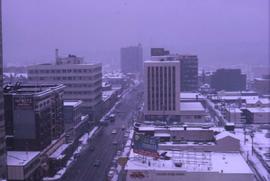 Foggy cityscape with snow on the ground

Colour Kodachrome 35mm slide depicts a foggy cityscape with snow on the ground and a sign in the foreground that reads: "Go BC Ferries". The image is taken from a high perspective, likely out of the window of a high-rise. This image is likely of Vancouver. 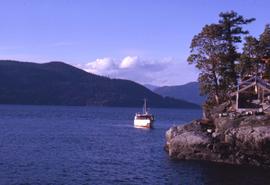 Colour Kodachrome 35mm slide depicts a body of water with a red and white boat and a house or cabin on a rocky, tree lined shore in the right side of the image. There are mountains in the background. 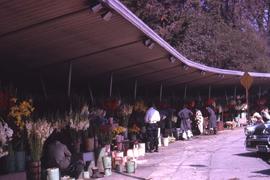 Unknown people looking at flowers under an overhanging roof

Colour Kodachrome 35mm slide depicts unknown people looking at flowers which are in pots and organized under an overhanging roof. 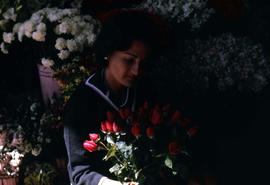 Colour Kodachrome 35mm slide depicts Phyliss Snider holding a bouquet of roses with flowers behind her. 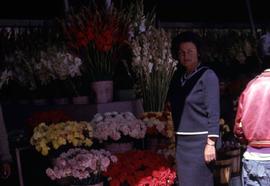 Phyliss Snider standing in front of bouquets of flowers

Colour Kodachrome 35mm slide depicts Phyliss Snider standing in front of bouquets of flowers, which are organized in seperate pots for each type and colour of flower.