The fonds consists of records from Dr. Irving and Phyliss Snider, including photographs, documents, films and artifacts. The fonds is arranged into 5 series: Travel slides; Photographs; Documents; Audio-Visual; and Artifacts.

Audio cassette depicts the history of the Vancouver Jewish Community Center. The film begins with the center's move to its current location (41st and Oak) in 1962, and describes the process of creating a new center. The film goes into detail ...

Audio cassette depicts the history of the Louis Brier Home and Hospital. The film highlights the need for a Jewish seniors home, the building process of the home, the facilities and programs that Louis Brier offers, and the need for additional fun...

Audio cassette depicts a tribute to Chief Justice Nathan Nemetz at the Vancouver Trade and Convention Center on June 23, 1988. The tribute honors the work that Nathan Nemetz accomplished over his career. 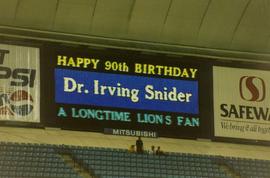 Colour print depicts the BC Lions Scoreboard with the message: Happy 90th Birthday, Dr. Irving Snider, A Longtime Lions Fan. The image was likely taken at BC Place Stadium. 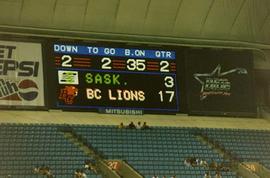 [BC Lions Scoreboard with blue bleachers below]

Colour print depicts the BC Lions Scoreboard with blue bleachers below. The image was taken in the second quarter and the score was 17 BC and 3 Saskatchewan. The image was likely taken at BC Place Stadium. 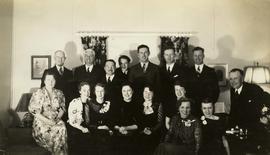 B&W print depicts a group of men and women dressed in fancy clothing posing for the camera. On the reverse of the image is written:"L-R RearWarren McFarland, I.E. Snider, Malcolm Matheson, John Harold". 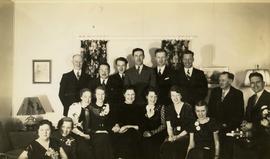 B&W print depicts a group of unknown men and women dressed in fancy clothing posing for the camera. Dr. Irving Snider is standing back row second in from the left. 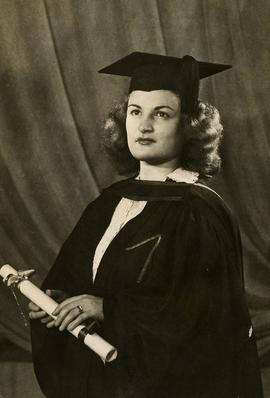 [Phyliss Snider's graduation photo from the University of British Columbia]

B&W print depicts Phyliss Snider's graduation photo from the University of British Columbia. On the back of the image there is a stamp that states: "Proofs Only Property of Alfred Knight Studio".