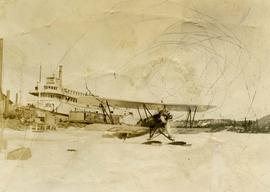 [Sea plane grounded on what appears to be snow]

B&W print depicts a sea plane grounded on what appears to be snow. There is a ship in the background. There are pen marks on the image. 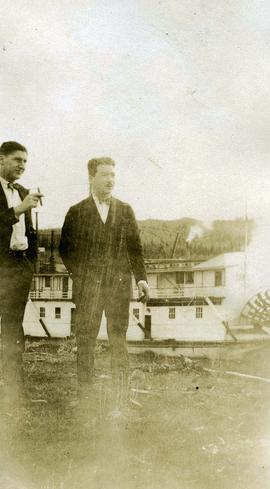 B&W print depicts Dr. Irving Snider and Dr. Robert Franks looking to the right of the image. There is a boat in the background.
Note: colour adjusted on jpg. 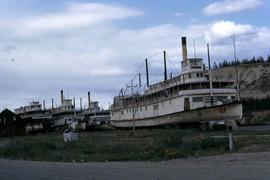 SS Klondike at display in Whitehorse, which operated between Whitehorse and Dawson City until 1936

Colour Kodachrome 35mm slide depicts the steamship SS Klondike on display in Whitehorse, which operated between Whitehorse and Dawson City until 1936. 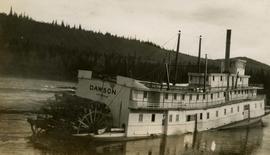 B&W print depicts the Dawson steamship when it ran aground on the rocks of Ruik Rapids. 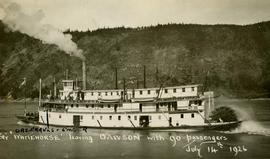 B&W print depicts the Whitehorse steamship leaving Dawson. "Str "Whitehorse" leaving Dawson with 90 Passengers July 14th, 1926" is written in white ink on the image. "Drs. Franks & Snider" is written in black ink with an arrow pointing to them on the front deck. This image is a postcard and has writing on the back that is illegible due to the black backing. Other copies available; see PastPerfect for details.