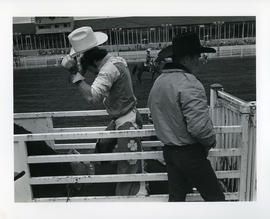 Photograph depicts Rocky Hukley and Jim Dunn; one of the men is standing above his horse in a pen, while the other is standing outside the pen facing the other direction. 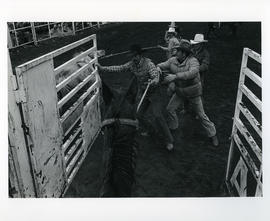 Photograph depicts the perspective from atop a horse; three men are holding a rope, guiding the horse out of its pen. In the background, three more men are attempting to guide another horse. The photographer's title suggests that Stu Vickers, Pat McHugh and The Jockey are depicted in the photograph. 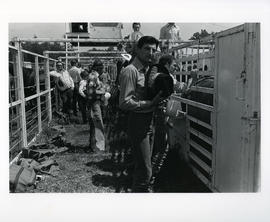 Photograph depicts a man holding his cowboy hat in front of a large group of men near the cattle pens; he is looking into the camera.