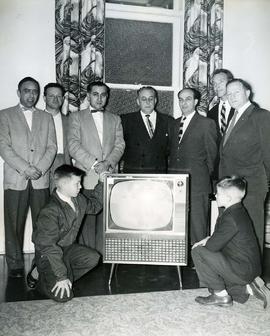 The community service committee of B'nai B'rith Lion's Gate Lodge presented a 21-inch 1958 Console Philco TV set to the Jericho Hill School for the deaf. Dr. C. MacDonald, director of the school, reported that the TV set would give his pupils both entertainment and practice with their lip-reading. Photograph is attached to a scrapbook. It depicts those who participated in the presentation (left to right): Chuck Kemp, Paul Tyre, Maurice Lifchus, Dr. C. MacDonald, Alec Jackson, Mr. Cardinall (school recreation officer), and Sam Gordon. Kneeling are two pupils of the school, Ronald Thorpe and Doug Lambert. 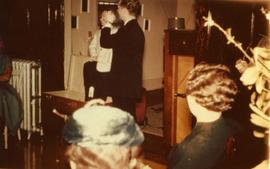 Photograph attached to scrapbook. It depicts children from a Children's Aid Society receiving home enjoying some entertainment at an Easter party. 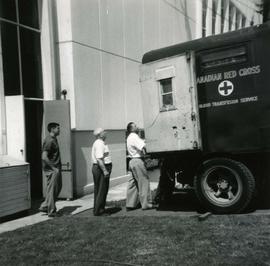 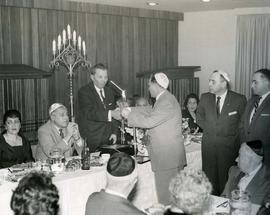 [Donating to Home for the Aged] 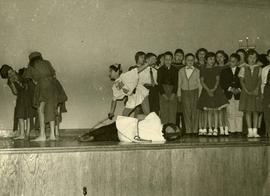 Oral history interview with Moe Cohen who was born in 1896 in Montreal.

Oral history interview with Louis Zimmerman who was born in Toronto in 1911. He was stationed overseas in England and Scotland, operating England's coastal radar chain between 1941 - 1945. He discusses Vancouver's Jewish Community Centre and the start of his career in Vancouver in 1948. Was recognized as a "servant and master" of the Jewish community in Vancouver for his outstanding record of service.