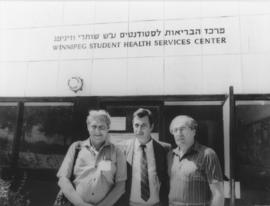 Interview with Earl Morris. Interviewed by Debby Freiman for The Scribe, 2018. Earl talks extensively about his family's Vancouver restaurants, The Red Onion and Bigsby’s the Bakehouse. He describes the challenges they faced in starting up and operating the restaurants, and reflects upon the role of the Jewish community and the overall changing Vancouver food scene.

Oral history interview with Erika and Katherine (Kate) Gerson (daughters of architect Wolfgang Gerson); in preparation for the 2015 online exhibit on Jewish architects.