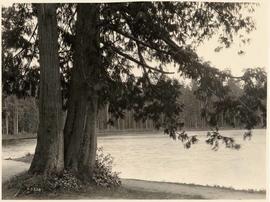 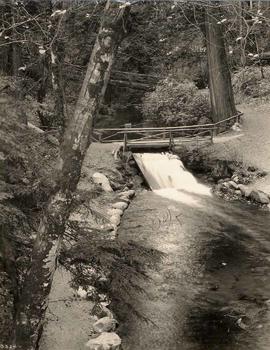 Footbridge over small man made waterfall running into creek; rocks along creek; dense foliage along either side of creek. 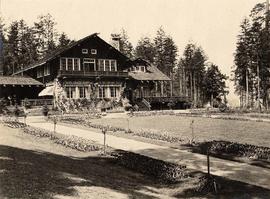 Photograph depicts the Stanley Park Pavilion. The Stanley Park Pavilion is a Class A heritage building, designed and by architect Otto Moberg to house the Vancouver Park Board. The 1911 Craftsman-style building features low-pitched gables; exposed, overhanging roof rafters; and a stone chimney. Moberg also built chalets and lodges at Banff and Lake Louise in the Canadian Rockies for the Canadian Pacific Railway. 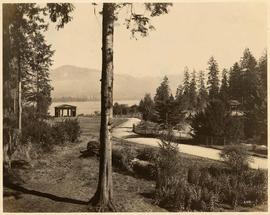 Meandering dirt path in middle of image; tall tree and shrubbery in foreground of image; replica Parthenon structure in middle left of image; water and mountains in background. 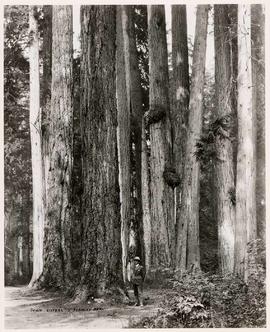 Photograph depicts the Seven Sisters in Stanley Park. The Seven Sisters were a stand of very large Douglas Fir and Cedar trees in the park which began to rot and decay around the turn of the century. The decay progressed as time went on and the Parks Board, considering them a safety hazard, wanted them felled. There was much public outcry towards this solution and in the 1940s, the Parks Board had them topped. By 1961, however, after most of the trees has rotted and crumbled away, the Parks Board finally had them all cut down. Today a plaque memorializes their remains.

Man standing in the middle of a stand of seven very large trees; man is wearing three piece suit and fedora. 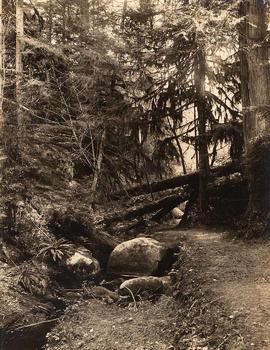 Large rocks and ferns in foreground of image; raised, rough dirt path on right side of image; fallen trees resting over path.

Photograph depicts the surf off of the shore of Stanley Park. 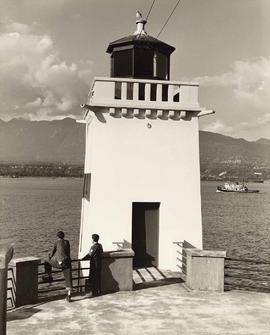 Photograph depicts the Brockton Point Lighthouse. The original structure was built in 1890 and was replaced with the current structure in 1914. Lighthouses, however, no longer operate in Stanley Park - there are now four automatic unmanned light beacons.

White tower structure with stripe painted around middle; dark turret like structure on top of tower; seagull on top of turret; two boys standing to left side of lighthouse, leaning against metal guardrail; North Shore and Coast Mountains in background.