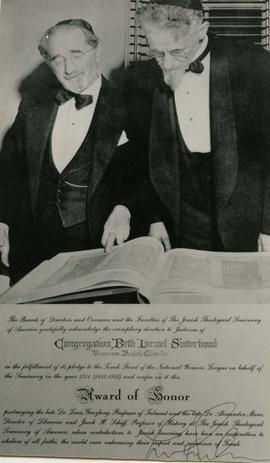 Series consists of an extensive number of community publications of a variety of community organizations and events.

The collection consists of sound recordings of Jewish pioneer and community figures relating to travel to and life in British Columbia and the Yukon from the Gold Rush era to the present. The memories chronicle Jewish life, community and organization development, and the transition from Jewish old world existence to that of the new world . Judaism and cultural elements, rural and urban life are explored in the interviews.

The fonds consists of administrative and operational records generated mainly by the local section including: textual records; photographs; sound recordings; and moving images. Records generated by the National Council for Jewish Women Canada are included as the policies, procedures and activities of the local branch influenced, and were influenced by the larger administrative body. The records were generated by members of the Board of Directors and members at large. Series 1, minutes, contains a fairly complete record of proceedings from the 1950s to the 1990s while earlier minutes may be found embedded in Series 3, President’s subject files and Series 12, Program, project and subject files.