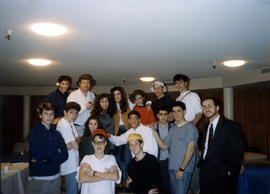 Photograph depicts a group of youth. 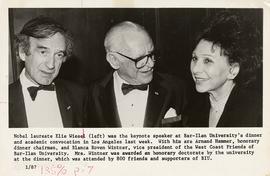 Photograph depicts (l-r) Elie Wiesel, Armand Hammer, and Blanca Roven Wintner at a Bar-Illan University convocation.
Caption: "Nobel laureate Elie Wiesel (left) was the keynote speaker at Bar-Ilan University's dinner and academic convocation in Los Angeles last week. With him are Armand Hammer, honorary dinner chairman, and Blanca Roven Wintner, vice president of the West Coast Friends of Bar-Ilan University. Mrs. Wintner was awarded an honorary doctorate by the university at the dinner, which was attended by 800 friends and supporters of BIU. 1/87."
Written on verso: Feb. 16, 1989 JWB.

Oral history interview with Nathan Divinsky who was born 1925 in Winnipeg. Notably Nathan's great grandfather Joe Nathanson acted as buying agent for General Baskakov in Russia. Nathan recieved in PhD in Mathematics in Chicago. He had lunch with Enrico Fermi. He taught at the University of Manitoba and than the University of British Columbia, where he became deeply embedded with the Vancouver community.

Oral history interview with Shirley Cohn. Shirley Cohn was born in Detroit, Michigan, to Hungarian Jewish immigrants who came to the US before WWII. Several of her father's siblings and her 2 year old cousin were killed in the Holocaust. This has heightened her sensitivity to issues of discrimination and prejudice. She has been a member of the BCASW (BC Association of Social Workers) Multicultural and Anti-Racism Committee for many years.

In 1977 Shirley Cohn and her family moved to Burnaby, BC. Holding a Master of Social Work from the University of Michigan, Shirley earned her Master's of Social Work at the University of Michigan and has been dedicated to her practice in the field ever since. Shirley has worked in her profession at Burnaby Hospital for the past twenty years. She has been a member of both the BC Association of Social Workers Multicultural and Antiracism Committee and the Ethical Resource Committee at Burnaby Hospital (which educates staff on ethical issues, and reviews complex cases).

Shirley's life-long had an awareness ofpassion for fighting discrimination from an early age stems, stemming from the loss of family members in the holocaust. After Shirley's move to British Columbia, she submitted photos of her relatives for an exhibit at the Vancouver Holocaust Education Centre.

Oral history interview with Gloria Levi. Gloria (née Hammerman) Levi was born in 1937 in Brooklyn, New York. From a very early age, Gloria understood the importance of engaging in her community and dedicating herself to issues of social justice. Since moving to Canada in the 1950s, she has continued to help improve the lives of those around her through her work with groups such as Jewish Federation of Greater Vancouver, Habitat for Humanity, Innovative Care Advocacy, and other organizations in Vancouver.

Gloria is a Gerontologist, Social Worker, and Author. With 30 years of experience in the field of aging as a social services consultant, trainer, and educator. Gloria has authored among other works "Dealing With Memory Changes As You Grow Older". Undergoing a Google search for Gloria Levi will find that she is extremely active in the community and sits on a variety of boards. Please take note of her work with the Louis Brier Home and Hospital as well as Habitate for Humanity.

Oral history interview with Dr. Ted Cohn. Theodore Cohn, SFU Professor Emeritus. His research interests include global and regional trade policy, international institutions, theories of international relations, and global cities. He is the author of Canadian Food Aid: Domestic and Foreign Policy Implications (1979), The International Politics of Agricultural Trade: Canadian-American Relations in a Global Agricultural Context (1990), 2 editions of Global Political Economy: Theory and Practice (2000 and 2003), and Governing Global Trade: International Institutions in Conflict and Convergence (December 2002). He is a co-editor of Innovation Systems in a Global Context (1998) and Power in the Global Era (2000). Dr. Cohn has also written many smaller monographs and articles on international trade, foreign debt, international development, crossborder issues, and global cities. Currently he is co-authoring a book on international organization.

Ted is originally from Detroit. He is married To Shirley Cohn.