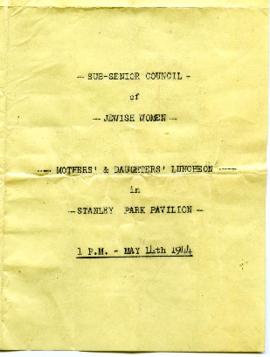 Oral History of Anne Goldbloom. Her father was from Poland, and her mother was from Russia, they meet in Liverpool. Her uncle, Jack Stark, was the first family member to come to Canada. He originally settled in Winnipeg but moved to Vancouver before Anne's family immigrated. Her father followed her uncle to Canada and they opened a store together. At 16 Anne got a job as a stenographer, a skill that she used working as Secretary for many Jewish community organizations. During WW2 she was in charge of the knitting group that was making items to send to the overseas soldiers. Most of the interview is about her work with the National Council of Jewish Women and their Baby Clinic. She talks a lot about the Jewish community that she grew up in Vancouver.

Oral history interview with Fannie Segall who was born in 1892. Was involved in the; Legion; Zionist's, fund-raising, Ladies Auxiliary. She moved to Vancouver for better opportunities for her children than they could receive in Cupar.

Oral history interview with Helen (nee Grunbaum) Rosen. Helen volunteered by teaching remedial reading through the Council of Jewish Women. Worked for Red Cross for 25 years in a variety of roles: circulating nurse, Blood Bank and took in a foster child.

Oral history interview with Fannie Samuels who was born on the along the Prussian border of Poland in 1896 and emigrated to Winnipeg in 1905. Fannie was involved in the Council of Jewish Women, Hadassah and Golden Agers. She moved to Vancouver in 1971, two years after her husband died.

An Oral history interview with Gertrude (Gertie) Zack (nee Fouks) who was born in 1918 in Canada. Gertie was involved in United Jewish Appeal's Women's Division, the Council of Jewish Women; and rolling bandages for the Red Cross during the Second World War. 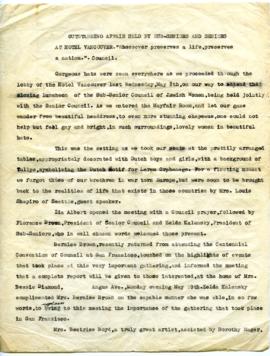 Undated report of the Sub-Senior Council of Jewish Women Mothers' and Daughters' Luncheon, which was held jointly with the Senior Council.