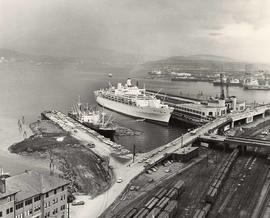 Photograph depicts an aerial view of piers and the CP services building.Rail cars and brick building in foreground of image; overpass leading to large building stationed on dock in right of image; white ocean liner named "ORIANA" in cent...

Photograph depicts an altitude view of the harbour. 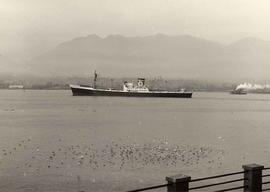 Photograph depicts "Canadian Star", part of the Blue Star Line fleet.Guard rail and flock of seagulls in foreground; freighter in middle of image; star in a circle painted on smokestack of ship; North Shore mountains in background. 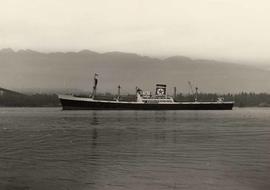 Photograph depicts "Canadian Star", part of the Blue Star Line fleet.Freighter with black hull in middle of image; star in a circle painted on smokestack of ship; North Shore mountains and beginning of bridge in background. 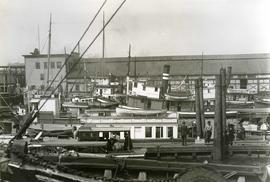 Photograph depicts docked tugboats and other vessels.Men standing on pier in suits and hats; small vessels behind men; wood building behind vessels. 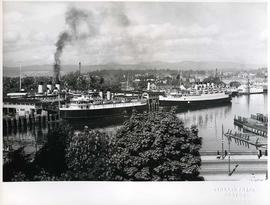 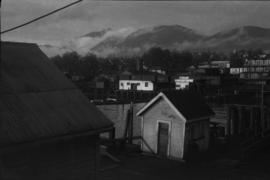 Black and white negative of harbour, with buildings around the water and mountains in the distance. 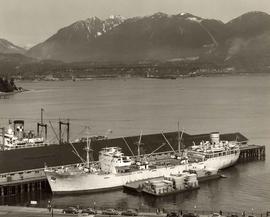 Photograph depicts a harbour scene, probably near the Second Narrows of the Burrard Inlet in Vancouver.Cars parked in front of guard rail in foreground of image; three small barges backed with lumber in front of freighter; name "FRED CHRISTEN... 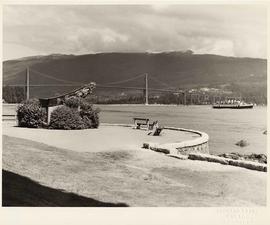 Photograph depicts the Lion's Gate Bridge as seen from the Stanley Park Seawall near the Figurehead of the Empress of Japan. Construction on Lion's Gate Bridge started in 1937, partly in an effort to create jobs during the Great Depress... 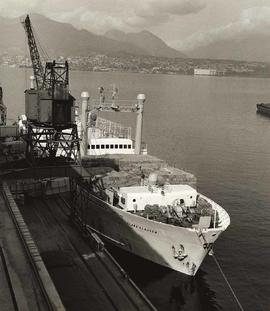