Oral history interview with Bertha Krivel who was born in Montreal, 1891 though soon after moved to Hirsch colony. Bertha recounts her hardships and experiences as a elder daughter on a prairie farm.

Oral history interview with Bessie Diamond who was born in London, England in 1899 but her family emigrated in 1905 to Canada. Bessie worked throughout the Jewish Community in Vancouver such as setting up the Well-Baby Clinic and during the Second World War worked with refugees. Bessie built the Joseph J. and Bessie Diamond Hospital in Israel to her late husband (1964). 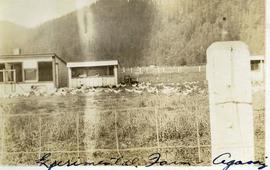 B&W print depicts a farm with many chickens running around on the grass. "Experimental Farm - Agassiz" is written on the bottom of the image.
Note: colour adjusted on jpg.

Oral history interview with Fannie Segall (née Barish) on her life growing up in Cupar Saskatchewan.