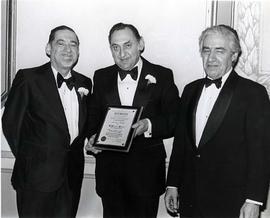 Dr. Abraham (Al) Bogoch was born on January 11, 1922 in Regina and passed away on August 17, 2004. Dr. Bogoch graduated in medicine with honours from the University of Toronto in 1946. He practiced as a gasterenterologist until his retirement in 1998. Dr. Bogoch was also a Clinical Professor at the University of British Columbia, as well as an author of numerous medical articles and one of the early definitive textbooks of gastroenterology. Dr. Bogoch was a Fellow of the Royal College of Physicians and Surgeons of Canada, and the American College of Physicians. He was also a member of the American Gastroenterological Association of Canada, the Canadian Association of Gastroenterology, and the Canadian Society of Clinical Investigation. Dr. Bogoch was also heavily involved in the Jewish Community. He was President of the Talmund Torah School, Principle Fundraiser of the school's building campaigns and a member of the school's board of governors. He is also a Past President of the Vancouver Chapter and Regional Chairman of the Hebrew University. He served as President and Campaign Chairman of the Vancouver Community Fund and Council. He was on the board of Camp Hatikvah, the Hebrew Assistance and Social Organization, the Vancouver Chapter of the Friends of the Hebrew University, and the Canadian Shaare Zadek Hospital Foundation and the Canadian Jewess Congress. He was also the Local Campaign Chairman for the State of Israel Bonds, as well as the Regional Director of the Canadian Council of Christians and Jews. He was one of the few Canadians who received the "Amudim Award" by the Torah Umesorah Day Schools for his valuable service and support to Hebrew education.

Dr. Margaret Adele Mullinger Bogoch was born October 22, 1921 in Toronto, and passed away June 16, 2012. Dr. Bogoch graduated in medicine from the University of Toronto in 1946. She, and Dr. Abraham Bogoch moved to Vancouver in 1953. She established a pediatric gastroenterology practice. . She was heavily involved in the medical community; she was a researcher, an author of medical articles, and a teacher to University of British Columbia medical students at the Vancouver General Hospital, and the Vancouver Children's Hospital. She was also an active volunteer in secular and Jewish organizations. She married Dr. Abraham Bogoch in 1950. They had three children (Sarah, David, and Ruth) and six grandchildren (Sam, Alexa, Dan, Adam, Hillel, and Benjamin).