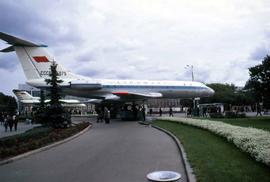 Colour Kodachrome 35mm slide depicts an airplane on display.Note for this slide reads: "2 jets on display." 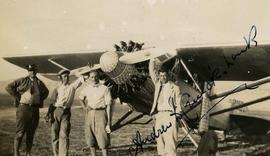 B&W print depicts four unknown men posing in front of a plane. "Andrew to [...illegible]" is written in ink on the image. 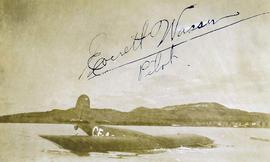 B&W print depicts the plane Billanca that crashed in Lake Atlin. The pilot was Everett Wasson and he was carrying 3 passengers. This information comes from two other images in this series. There are five images in the series. "Everett Was...

Oral history interview with Esmond Lando who was born in England, 1908. Esmond started his career practicing law, connections with 'Spilsbury and Hepburn ship-to-shore radios' led to partnership. Also involved in logging industry and own... 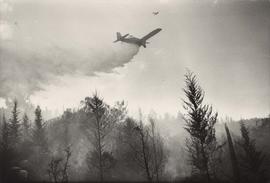 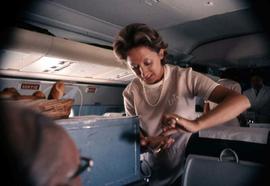 Flight attendant tending to a passenger inside an airplane

Colour Anscochrome 35mm slide depicts a flight attendant tending to a passenger inside an airplane. 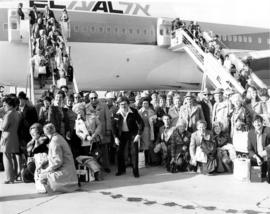 Photograph depicts a group of people disembarking from a plane onto the tarmac.