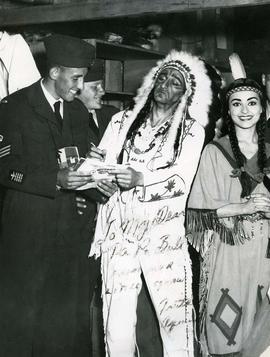 Ben as Chief Sitting Bull signing an autograph for a R.C.A.F. personnel

Photograph depicts Ben, as Cheif Sitting Bull from "Annie Got You Gun", signing an autograph fro an unidentified R.C.A.F. personnel. There are two unidentified R.C.A.F personnel behind Ben . To the right of Ben is what is most likely a fellow cast member, dressed in costume. Written on verso: [Calel] Parker. Written on front: To my Dear Pa Pa Bull, From Your Little [rest of inscription illegible].

Oral history interview with Bill Gruenthal who was born in 1935 in Netanya, Palestine. His father's side is from Silesia, Germany and his mother's side comes from Lower Saxony and Aachen. Bill has been a part of the Jewish National Fund and worked for the Vancouver Board of Trade. Bill discusses tensions between Arab and Jewish communities growing up.

Oral history interview with Ed Rozen who was born in Vancouver, 1918. Ed joined the Air Force in 1935 in the 111th Squadron. When war broke out in 1939 his reserve squadron was folded into the permanent Air Force, leading Ed to go to Bombardier and Gunnery school. Is a founding member of the B. C. Jewish Veterans Association.

Oral history interview with Esther Nobleman. Esther Nobleman believes in the importance of serving the community however one can. Since her arrival in Vancouver from Medicine Hat in the fall of 1969, Esther has contributed much to the Jewish community here. Among other volunteer activities, in the early 1980s she threw herself into the campaign to safeguard the rights of Jews in the former Soviet Union as chair of the Soviet Jewry Committee. Even when time has been all that she's had to give, Esther has given it freely and generously.

Esther was born in the prairies and her husband, Abe Nobleman, was born in Montreal. Esther's parents came to Canada from Russia; Esther' father was in the Russian army but they escaped Russia because of the pogroms. Esther was in the air force in Canada. Her brother was a prisoner of war. Esther worked extensively with the Soviet Jewry campaign in Vancouver as well as being actively involved in a number of organizations and volunteer work.

An Interview with Philip Waterman who was born in Saskatchewan, 1918. Interview consists entirely of Mr. Waterman's experience in the Royal Canadian Air Force - joined 1940 - during the Second World War; including earning the American Air Medal and being sent to a Prisoner of War camp in Poland.

Oral history interview with Leonard Korsch who was born in Vancouver, 1920. Was involved with Young Judea until he started at the University of British Columbia, graduating in 1942. Leonard than joined the Royal Canadian Air Force as a radio mechanic. Leonard was in the realty business for fifty years - on the Vancouver Real Estate Board - alongside being a notary public and insurance agent.

Oral history interview with Mitchell Snider who was born in 1918. He was a radar technician for the Canadian Air Force during the Second World World.